(This is a response to a darling play I saw last night titled “The Seekers” written by Kristin Frangoulis and produced at “Elbow Room” at the Waterfall Arts building in Belfast, ME.)

The 70’s were my “granola” days. I cannot claim to be part of the “back to nature” movement which took place in Waldo County in the 70’s, because I had a job teaching 6th grade. I lived in a shabby little house in Frankfort, Maine, which was purchased by a spouse and myself for only one reason – we could afford it. It was situated at the major curve in the main road, Route 1A, between Stockton Springs and Winterport.

I did identify with many of the traditions of the time. The little house was heated with wood, using a Scandinavian wood stove we had purchased from Frank Raftery’s wood stove store on High St. in Belfast. By necessity, I learned to bank a stove for all day coverage, because teachers cannot run home for lunch. I had some propane backup, but it was bloody expensive to use it, so I rarely did.

The picture that follows shows the house before we bought it. My father, the carpenter, arrived a few times with tools and doors and wood and cabinets. Dad made the place more livable. He installed a front door without a hole where the knob was missing. He added a mudroom and porch on the front. He enclosed a back deck making a place for firewood storage out of the weather. He added a bathroom with running water and a place for a washing machine. I had not been fond of the “inside outhouse” at the far corner of the woodshed.

He arrived with lovely cabinets he’d made to make a real kitchen where there was just a sink and small gas range. He’d made them from American Chestnut, his favorite wood, which he’d hoarded whenever it could be found. He gave me bright red counter tops, and I was delighted with how bright and cheery they were. I loved how the red counters looked with my white and black Bennington pottery and my red placemats from Willey’s General Store in Greensboro, Vermont.

The little house sat close to the Marsh River, too close for a septic system. We settled on a composting toilet called an ecolet. One had to mount two steps to be seated and so it stood like a throne in the new bathroom. It was far better than the outhouse.

In those days, being dirt poor (teachers did not earn enough to make sends meet), I made my own yogurt, baked my own bread. I joined the newly formed Belfast Coop, and had to put in my hours once a month working there, meting out one pound bags of prunes from a large cardboard box, weighing bulghur, rice, and oats.

I ate lots of tabouli and soybean soup and lentil loaf back then.  My many bulk foods were stored in large jars on the top of the cabinets, and they added interest and color to my red kitchen.

The little house had once been a general store. So the layout was odd. Local people remembered sitting around a potbelly wood stove, and scooping bulk foods like flour and rice from barrels right about where my kitchen table sat. The owners would have lived upstairs, which explained why I found a dry sink in my upstairs hallway. There had been stairs once upon a time on the outside of the building to the second floor quarters.

My favorite time there was when my good friend Martha, another teacher, moved in with her toddler, dog and cat (I had one cat, too) It took two teacher salaries to cover the basic bills. I managed the inside of the house. Martha managed the outside. She enjoyed mowing the tiny lawn. She planted a few flowering bushes, and cultivated a small vegetable garden. We were over the moon delighted when we heard that the green onion plants we had been given came from Scott and Helen Neering’s garden!

Our only Thanksgiving there was memorable. I had a good table with two leaves. I made the splurge purchase of a harvest gold tablecloth, which I still have. I had a set of china but no silverware to speak of. Martha, who had no china, had inherited a service for 12 of sterling silver, never before used. Between the two of us, we had created a wonderful looking table. We invited a few friends to dinner.

The most memorable part, though, was the atmosphere. You see during the summer prior, I had gone down to MDI to work for the summer as a waitress at the “Head of the Harbor” restaurant in Southwest Harbor. Teachers didn’t get summer pay, of course. So summers meant finding work. With the house empty for two months, mice had moved in.

I had an awesome cat then, who’d gone to Southwest Harbor for the summer with me. Once we returned, she went to work. While the house had been empty, mice had moved in. My cat  honed her mousing skills. Each night I would hear her hunting, I would hear a squeak and a pounce, and then find a dead mouse in the morning. This went on through the autumn. The last time I heard her hunting at night, I had never found the dead mouse. I looked everywhere, emptying the woodpile, behind cabinet drawers -I pulled the house apart.

I may not have mentioned that I didn’t cook much in those days. Especially things that required an oven. Turkeys require an oven. So when I preheated the oven for our Thanksgiving turkey, I located the dead mouse.

The smell of dead burning mouse was unforgettable and unappetizing to say the least. Once removing the carcass, we tried to air out the house. But, it was 5 degrees outside that day. Opening the door could only last a few seconds. And the wood stove was working overtime to heat up the house. So we found some scented candles, and that made it all bearable.

The following year, the chicken industry folded in Waldo County. I was laid off along with two other teachers after many families with children moved away. I went off to grad school; Martha found a quaint cottage home in Stockton Springs. She still lives there. I rented out the house in Frankfort. The tenants never told me the ecolet stopped working. They used something, maybe a camper potty, and buried the waste in the tiny yard contaminating the well. I got back from school to find a letter that my property was condemned.

I gave the house to the town for the tax deduction. It was the only course I could think of. They sold some contents, then let the volunteer fire department burn it down. Now there’s something far uglier there than my little house.

It took me until 2009 to get myself back to Maine except for visiting. As much as I loved the place, I was so sick of being poor. So I accepted jobs elsewhere, and returned to retire. In a sense, I had to leave in order to afford to come back.

I loved it when I went to get my Maine drivers license again. They gave me my old license number and said “Welcome home.”  I was home, truly, and I still am.

[The picture that follows in the little house on Route IA in Frankfort. The photo at the start of this piece is me, while working in Bar Harbor for the summer, sitting on the rocks of Acadia National Park near Thunder Hole.] 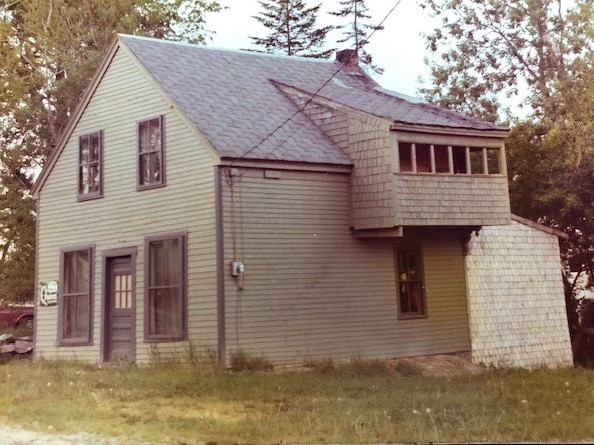 As a retired teacher and professor of literacy, I now in my retirement spend time writing novels, poetry, creative nonfiction, and picture books. My foremost audience is young readers ages 11-14. But I also write stuff for grown-ups. View all posts by wendyckasten

This site uses Akismet to reduce spam. Learn how your comment data is processed.